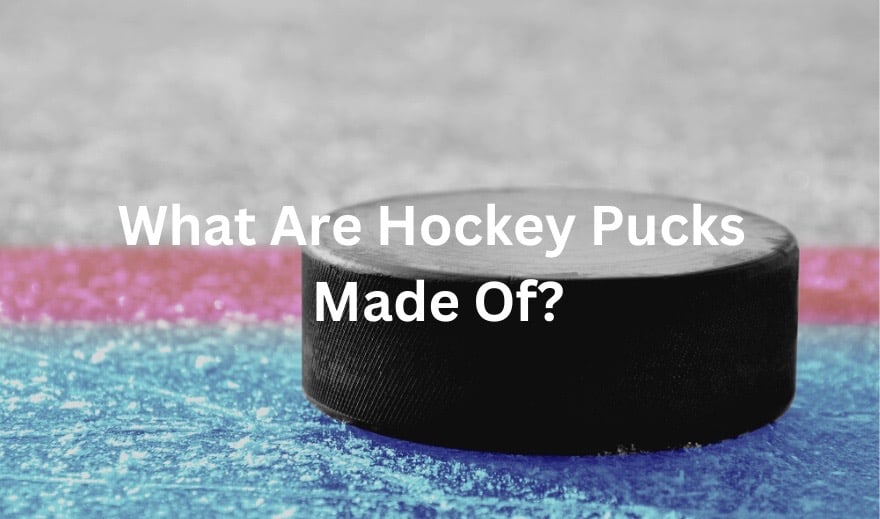 The hockey puck is one of the most important pieces of equipment used in a hockey game.

On average, one NHL game goes through at least a dozen pucks, leaving many taking them for granted. You may be surprised to learn the amount of knowledge and history there is behind the puck.

But what are hockey pucks made of? Well, hockey pucks are solid flat black discs constructed from vulcanized rubber.

Pucks are manufactured across many factories in the world, including China, Canada, Russia, and the Czech Republic.

During professional hockey games pucks are frozen to reduce their bounce and prevent them from sticking to the ice.

In this article we outline the history, puck types, manufacturing, and quality control of the puck to give you a one-stop-shop for all essential puck information, leaving you in a position to impress your hockey friends with all this puck content.

What Is A Regular-Sized Puck?

The standard puck size used in the National Hockey League (NHL) is 3 inches in diameter (75 millimeters). It is also 1 inch thick and can weigh between 5 1/2 and 6 ounces.

The side of the puck is designed with many textured grooves. These small markings enable the hockey stick to grip better when handling and shooting.

In addition to the standard size, there are also smaller and larger pucks manufactured. These tend to be used in kid’s hockey games.

In the shops of NHL teams, you may also find souvenirs or practice pucks which are considered unofficial. You can also find pucks with your favorite team’s logo on the top or bottom of it.

History Of The Puck

The puck has a long and plotted history which we will do our best to summarize.

Ice hockey originated from field hockey in Canada in the 19th century. The advent of long, freezing winters ensured that hockey was easily played in many public places. During this time, the sport also became popular in northern states of the US.

In early configurations of ice hockey, a ball was used for players to hit. However, the ball bounced too much and proved ineffective on ice. Instead, a block of wood was often used.

What we know as the modern-day hockey puck was invented in 1875. However, there are two stories about where it was invented.

One theory is that students from Boston University in 1875 sliced off a rubber ball to naturally make a puck.

The other invention story comes from Montreal in Canada, where an owner of an indoor ice rink sliced off a rubber ball to create a puck. Either way, the first recorded use of what we now know as a puck was used in Montreal in 1875. 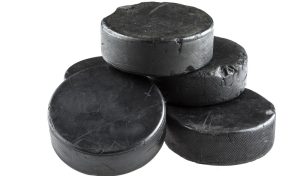 Once the early rubber puck was popularized, better designs were created. Some of the earliest pucks made involved gluing a couple of pieces of rubber together, such as recycled car tires.

However, due to the construction and the glue, the pucks would often disintegrate after being hit.

In the 1931-1932 hockey season, a puck with sloped edges was used. However, this received many complaints from players and led to them returning to the original puck design.

It was only until the 1990-1991 season that the first official National Hockey League puck was designed.

During the 1995-1996 NHL season a new puck named the Fox Trax Puck was introduced.

As the sport became televised on Fox TV, producers sought to create a puck that was easier for a TV audience to view.

The design included a battery in the center and a computer board with 20 pin holes throughout the puck.

The pin holes were used to guide infrared emitters to the location of the puck. These movements were picked up by fiber optics in computers in the “puck truck”.

The visual appearance of the puck was a blueish color which made it much easier to view on a small TV screen.

Also, when a player hit the puck, a small visible red tail would appear on the TV to allow them to track the movement.

However, due to the technology used in the pucks, they were quite expensive to produce, costing roughly $400 per puck.

Players also complained the Fox Trax puck moved poorly on the ice, leading to the design being discontinued after the 1998-1999 season.

Hockey pucks are made using vulcanized rubber. Modern-day pucks include the design of the team’s logo located on the top and bottom.

The logos are designed to be silkscreened onto the rubber which uses color processing and rubber ink.

As discussed, the Fox Trax puck included computer elements, such as infrared emitters, a lithium battery, and an oscillator. However, these components are no longer used in NHL pucks.

To produce these pucks, the rubber arrives on the factory floor from a packed cord. The cord is fitted into 40-foot-long tubes and is then fed by hand to a pultrusion machine.

The machine which is monitored by workers pulls the rubber to slice long pieces, measuring roughly 4 to 5 inches in thickness.

After this, the machine grabs the four-inch rubber cords and places them into a mold containing two parts. The mold is then heated and compressed. Using this technique, one factory can make up to 10,000 packs in a single day.

Following the construction of the puck, it is then silkscreened and inked using a rubber-based compound.

Typically, there are four kinds of silk screen machines which will include the colors of the teams and also the logos. When being fed into the machine, the logo is placed onto the puck.

The pucks, once complete, are placed in a shipping case of 100 per case. Each pack is separated with wax paper to prevent the logos from being ruined.

NHL regulation pucks are made slightly differently. The granular rubber compound is mixed by hand with a special bonding material.

This mixture is then poured by hand into a two-part mold. Once placed in the mold, it is compressed at room temperature. Around 5000 pucks are made in a single week using this technique.

Similar to souvenir and practice pucks, NHL pucks undergo a silk screening and rubber inking. They are placed into silk screen machines and the logo is placed onto the puck.

These pucks are also placed into cases of 100, with wax paper separating them.

To ensure pucks meet the standard of the National Hockey League, they are checked for size and weight.

If a particular puck does not adhere to the standards then it is recycled with the rubber used to make more pucks.

Once a batch of pucks is made available, a sample of them is frozen for 10 days and then bounced.

A tester will compare the bounce of one batch with a previous batch to ensure there is consistency in how they apply themselves on the ice.

During the silkscreen and rubber inking process, moisture in the air can affect the puck’s quality. If there are any dust particles or hair on a punk, it is washed using paint thinner and then put through the silk screening process again.

Likewise, pucks that were constructed with softer rubber were also rejected for containing air bubbles.

We do not expect any major changes to the design and manufacturing of the puck going forward.

Although some junior hockey games experiment with different colored pucks, there is a very limited impact that these different colors have on the sport.

Hopefully, this brief article has given you insight into the history, manufacturing, and design of the ice hockey puck.

Over the years, the puck has developed significantly from a slice of a rubber ball to a neatly designed, high-quality rubber puck with NHL games through plenty each game.

Although the experimentation with the Fox Trax pup was not successful, modern-day technology ensures the puck performs well in professional and amateur hockey leagues across the globe.