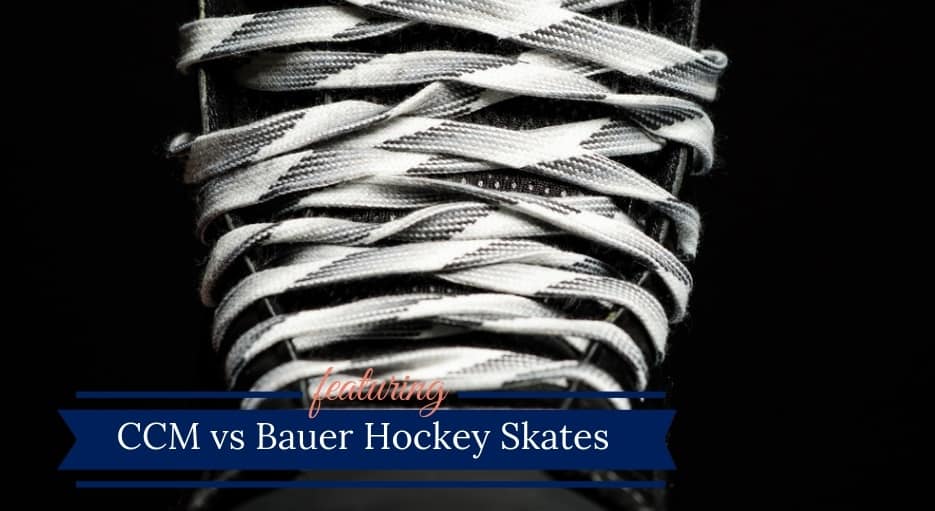 Looking at CCM vs Bauer skates, you will find that they are the best-known and most popular hockey skates.

In fact, it can be overwhelming to try to decipher which model of which brand would be the right choice for you. Let’s be honest, when comparing Bauer vs CCM skates, you get great quality and both will deliver on results.

It is easy to get lost in the sea of options and try to discern which skates might be the right choice for you.

We have broken down the popular lines of each brand to help you deduce which models of skates would be the best hockey skates for you.

Bauer decided to change the way that their skates fit, moving to the new performance fit system. The one part of the big change was that entire Nexus line was removed, but that line really had not been keeping up with the Vapor or the Supreme.

While skaters with wide feet might be afraid of the removal of the Nexus line, now there are new fits in both the Supreme and the Vapor lines, allowing for high-volume and wide feet with a FIT3, whereas FIT1 is narrow, and FIT2 is a more standard fit.

Now, skaters can now choose their skates not just on the width of the skate, but they can choose them on their performance level as well.

While all Bauer skates are good quality, there are differences between them all. To begin with the Vapor line is made to be a low-volume, narrower fit. These skates have a tapered fit and a standard toe box.

Meanwhile, the Supreme line has a more medium fit, so they are more anatomical in both your toe and heel, giving you a more natural feeling.

The Nexus skates are meant for wider feet or skaters who prefer a little more room. 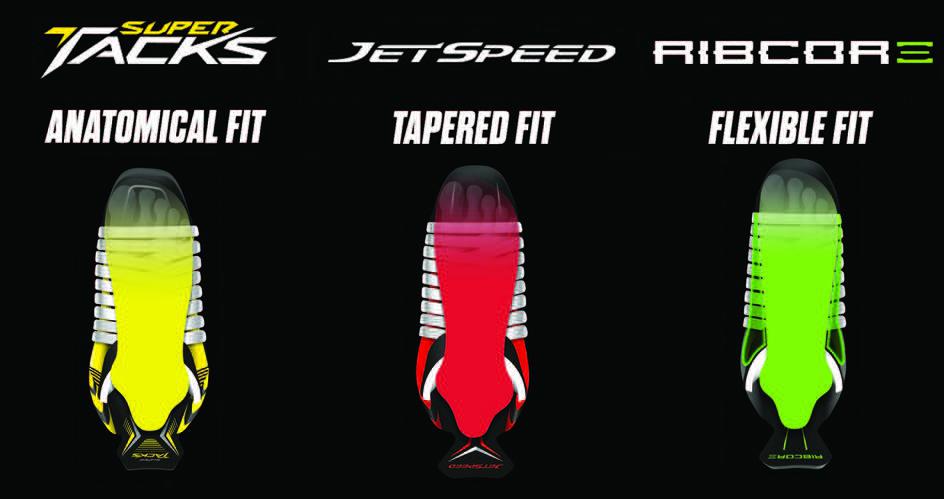 Like the Bauer lines, the CCM lines all have differences. The Ribcor line is a narrower, snug-fitting boot that is intended to make the skates feel more like they are part of you.

There is a little more toe room in the Jetspeed line, but they do have a heel lock, so your foot will not be sliding all around.

The Tacks skates are the widest of the bunch, working well for skaters with a high profile foot or wider forefoot.

The Bauer Vapor and CCM Ribcor models are two of the most popular lines of hockey skates that you can get. Both lines are made for players who need speed. This means that the skates need to allow for a quick acceleration as well as a quick deceleration.

Fit-wise, the Ribcor skates have a flexible boot, which will help deliver the most powerful strides possible. The Ribcor skates are also narrower with a tapered cut to eliminate any excess space within the boot.

Meanwhile, the Vapor line is also a flexible boot, but it has a low cut, low profile foot bed. Overall, the boot is higher than the Ribcor. It also has a snug fit, eliminating any excess space as well.

Generally, both skates are for aggressive skaters and both are made to have intense speeds. Here, you will need to choose which skate fits you better as both have the same attributes.

Our choice of the best skates between the Vapor and Ribcor lines is the Bauer Vapor 2X Pro. They have an increased level of stiffness compared to other skates, offering you more stability and better overall performance. They also have a Lock-Fit, which will keep your foot exactly in place, allowing the skate to be an extension of your leg.

In the battle for the best budget friendly skates, the Bauer Vapor X2.9 takes the trophy. These skates use Bauer’s new fit system, but they also have the PERFORMFLEX system, which will help keep the skates comfortable, giving you a great fit. When skates fit well, you will naturally have better performance. They also offer some personalized comfort in the ankle, because the skates are thermoformable, reducing break-in time and giving you a perfect fit.

The Bauer Supreme and CCM Jetspeed skates are comparable lines. Both lines are made for powerful and strong players who need a little extra space in their boots.

The CCM Jetspeed skates have a narrow boot with a secure heel lock to keep your foot in place. This will increase the power of your stride as there is no energy loss as you push. They are also stiff and stable.

The Bauer Supreme line is also made for a power player, but the design is bigger than the Jetspeed line. The Supreme skates seem better suited for defensemen and players who have larger or wider feet.

Both of these skate lines have higher toe boxes, which will give more room than other models. They also have a higher level of protection than other skates that are of a similar quality, which is good for players who are often in corners.

Our choice for the best overall hockey skates between the Supreme and JetSpeed lines is the Bauer Supreme Ultrasonic. Not only do these skates use Bauer’s new fit system, but they also have the Bauer Power Profile. This is known as a 4-zoned radii, giving the blade four difference zones to work with. The amount of control that this will give you is amazing. The Flex rating on these skates is a 90, which means it is for elite skaters.

For a budget friendly pair of skates between the Jetspeed and the Supreme, we recommend the CCM Jetspeed FT470. These skates use high-end features without the high-end price tag. They have reinforced, vented, and injected outsoles to improve the energy of your strides as well as pro-styled protection.

There are a lot of similarities between the Bauer Nexus and CCM Tacks skate lines. They are both made for traditional two-way, defensive and offensive players. They are built for players who need both responsiveness and support.

The CCM Tacks line provides a high level of boot volume and stiffness, which will accommodate higher profile feet with a more anatomical fit. This means there is a little more room in the boots, but not as wide as the Nexus skates are.

The Bauer Nexus, on the other hand, has the largest boot volume all-around. They also have the stiffest boot profile of any of the Bauer lines. They have a classic fit, meaning it is wide all throughout the boot.

Both of these skates will work for wider feet, but the Nexus is naturally a wide-width boot, so it is something to keep in mind when trying them out.

Our choice for the best hockey skates between the Nexus and Tacks lines are the CCM Super Tracks AS3 Pro hockey skates. These skates have an anatomical, formfitting, 360-degree support in the foot, heel, and ankles. There is also a one-piece carbon composite MonoFrame that will support direct energy transfer. With all of these features, you will have incredible control over how you skate, giving you more direct energy transfer.

For a budget friendly skate between the Nexus and Tacks lines, we suggest the Bauer Supreme 3S. While, this is not a Nexus skate, remember that the line has been removed, so now Supreme and Vapor are taking over. The Supreme 3S skates use the 4-zoned radii for better blade contract. They also have a power cut for increased wrap and better foot stability. As a result, you will get a more powerful stride.

Comparing such high level skates as CCM vs Bauer can look a little like comparing apples to apples. But remember that both brands do have their pros and cons. Knowing which lines to look at can help point you in the right direction and get you in the skates that you really need.

Whether you have wide feet or narrow feet, are a defenseman or forward, you need to have skates that fit you and work with your position to give you both comfort and performance. Try on models of both brands to really get an idea of which are the perfect hockey skates for you.

1 thought on “CCM vs Bauer Skates (Vapor vs Ribcor, Supreme vs JetSpeed, Nexus vs Tacks)”