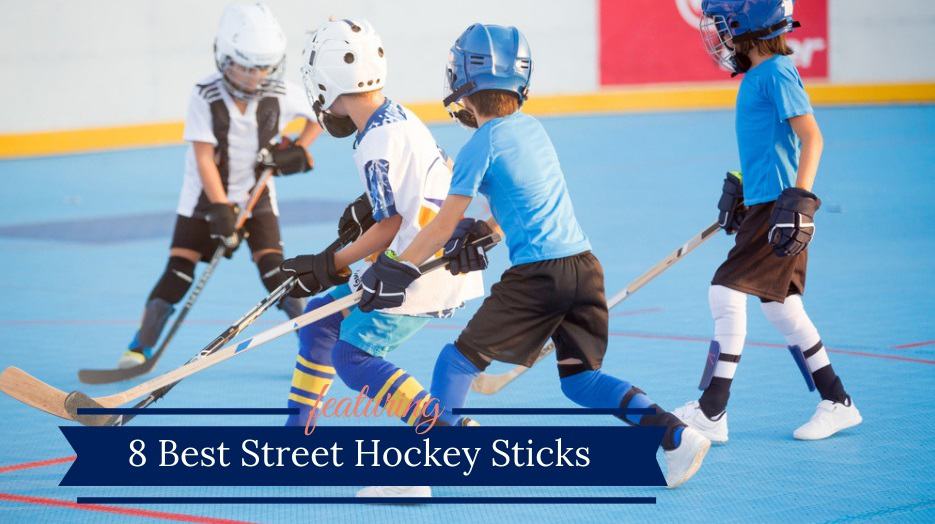 Composite hockey sticks might work temporarily, but they are built for the ice, not the asphalt.

Instead, you should be shopping for a wood hockey stick made for the street. Street hockey sticks are built specifically to play with a ball instead of a puck on rough ground instead of the smooth ice.

What To Consider When Choosing A Street & Roller Hockey Stick

Regardless of the material that you go with in your street hockey stick, because of the roughness of asphalt and concrete, your stick is going to be chewed up. For this reason, even though you could get a high end composite stick, it is best to stick with not so expensive wood hockey stick.

Wood runs the risk of splintering, where composite can crack. The best thing you can do is get a stick that combines the two materials for a strong and durable stick that doesn’t cost a fortune to replace.

If you have played ice hockey, you will find that street sticks are heavier than their ice counterparts. This is because ice hockey sticks are made out of light composite material and not wood.

However, heavier wood stick is more durable and will last longer when playing on concrete. Not to mention wood sticks are way cheaper than composite sticks.

As we already mentioned, street hockey is rough on sticks, giving them a fairly short life span. You can get some that have a wrap or a laminate finish that give them a little bit more life than they would have had otherwise.

You don’t want a stick that is going to break after one game, but don’t drop a bunch of money on a stick that might be more durable, but really not last much longer.

Our choice for the best street hockey stick is the Sher-Wood 5020. This stick brings back an old-style appearance with modern technology. 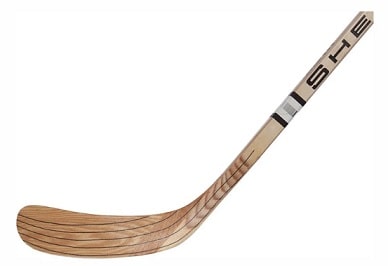 While it looks like an all-wood stick, the shaft is covered with layers of birch lamination, giving you a look that appears wooden, but is easier to hold and more durable. Combined with the impact-resistant fibreglass blade, the 5030 should last for countless games.

This is an 80 flex stick that is light and reliable with a low-kick and is really the best of both the old and new worlds. If you played street hockey as a kid, you might get a similar feeling from this easy-to-use stick.

The shaft is a traditional design combined with an already familiar white ash blade, giving you a traditional feel with multi-dimensional functionality. The overall strength means that your roller hockey stick will not only make it through several games, but it also easily handle hard passes. 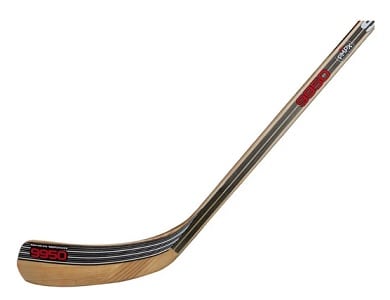 The 9950 is a lightweight design with a core that has been reinforced with a fibreglass and carbon fiber, which adds an extra amount of stiffness and responsiveness. The material is also the biggest contributing factor in how it is so light. You will get excellent performance from this reliable stick.

This street stick has a heavy flex of 105, which is practically unheard of otherwise in the world of street hockey, with a traditionally-shaped shaft and a fibreglass blade. The double horizontal birch lamination covers a two-piece aspen core. All in all, you will get a blade that has been reinforced with multidirectional and highly impact-resistant fibreglass.

If you are working within a budget, which really makes sense given the average life-span of a street hockey stick, we suggest the Bauer I300. At this price, replacing the stick when it breaks will not be as cringe-worthy as a more expensive stick. Even better, this is a Bauer brand stick, which is known for its quality and reliability. 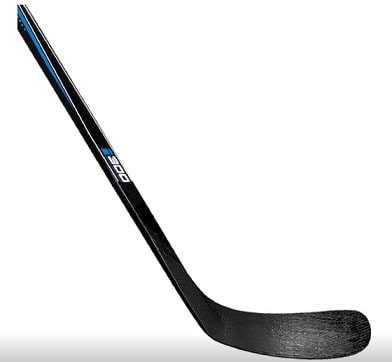 This is a lightweight, multi-ply handle that really works on whatever surface you are playing on. The I300 has an 87 flex rating, which is a study flex to have. It is recommended for youth players, though younger teens might find this flex rating too high for their needs.

Design-wise, the I300 is sleek-looking, with a black coating. The blade’s construction provides superior puck control and shot velocity, so you should still be able to get the force and power from this stick without breaking it right away.

Another great street stick choice that is also budget-friendly is the CCM Ultimate. This stick is made to handle outdoor surfaces that are known to chew up wooden sticks. The ABS blade is fused right onto the wooden shaft to improve the overall durability.

The Ultimate stick has an 85 flex, which is about average for a quality stick. It is also great to have this at such an affordable price so when it eventually does break, it will not also break the bank when you have to replace it. Yet, since it is made to handle some abuse, it should still last awhile for you.

This stick has been reported to be a little heavier than some of the other street sticks out there, but that shouldn’t be a problem if you are prepared for it. If you need a lightweight stick, it is probably better to look into a different one.

You will not be disappointed with the Fischer HX5 ABS street hockey stick. This is another budget-friendly model that can meet the needs of those of you who are looking for something a little different.

The HX5 has a 70 flex rating, making it a little bit on the lower side of things, which is easier for smaller or younger street players. This is also a nice transitional stick for anyone who primarily plays ice hockey, but would still like to get in some action off the ice. The stick is not designed with the intention of looking like a traditional stick, but instead has a slick black coating.

The G-Laminate on this stick adds an extra stiffness rating, making it a more durable blade. It also has an added protection against splintering when it does break. It should not break easily and can take a lot of hits before showing signs of damage.

Another budget-friendly street stick is the Sher-Wood T20 ABS. This stick has a multi-layer birch lamination for added durability as well as the illusion of a natural wood finish.

The ABS construction of this blade is made to play on any hard surface, including the hardest that might tear apart a stick of less quality. It still is a nice and lightweight stick, however, which will make it easier to manoeuvre and should not wear you down throughout a game.

Like any of the quality street sticks, the T20’s blade has an ABS construction, which will allow you to easily play on any surface, giving the stick a longer life. It also has an 85 flex rating, which is an excellent mid-flex. The shaft itself has rounded corners and straight sidewalls as well, making this an easily manoeuvrable stick that is sure to help you in the game.

The Fischer Hockey W150 is a black stick comprised of wood material. As a result, the stick is light to use and cheap when it needs to be replaced. Really, this is best described as a classic wooden hockey stick, ideal for playing in the street, on a court, or anywhere if you enjoy the feel of it.

This stick is made out of quality woods, making it sturdy and easy to hold its own weight. It has a flex rating of 85 with a mid-kick flex point, giving you a more neutral type of stick to play with. The mid-kick point is ideal for players looking for the best power that they can get from a shot.

The shaft itself is only one-piece, made entirely of wood with a fibreglass blade. It has rounded corners and straight sidewalls to ensure the ease of manoeuvrability.

The final stick that we will take a look at is the Fischer Hockey HX1. This is another wooden hockey stick that is well-made, but will not break the bank if and when it breaks. The shaft is made from multi-laminated plywood and the blade is a multi-layered wood laminate with a fibreglass insert, giving you better longevity.

The HX1 has a flex rating of 70, which is a little on the lighter side, but it should still pack a punch if you need it to. Best described as a classic twig, the HX1 has a natural flex and dynamite feel, making it easy for anyone to use.

Even though this seems like just an ordinary twiggy stick, it does utilize hybrid technology, giving you the strength and feel that you would hope to get out a of a quality street hockey stick.

How To Measure A Street Hockey Stick?

The measuring process of a street stick is the same as that of an ice hockey stick and it really comes down to personal preference. The length of your stick can alter how you handle a puck, affecting your skating as well.

The general rule of thumb is to measure with your roller hockey skates on. Put the stick standing upright and perpendicular to the ground and the top of the shaft should come up to your chin. Some players like longer sticks to have a longer reach where others like a shorter stick to be more agile. It is all personal preference.

How Long Does A Street Hockey Stick Last? 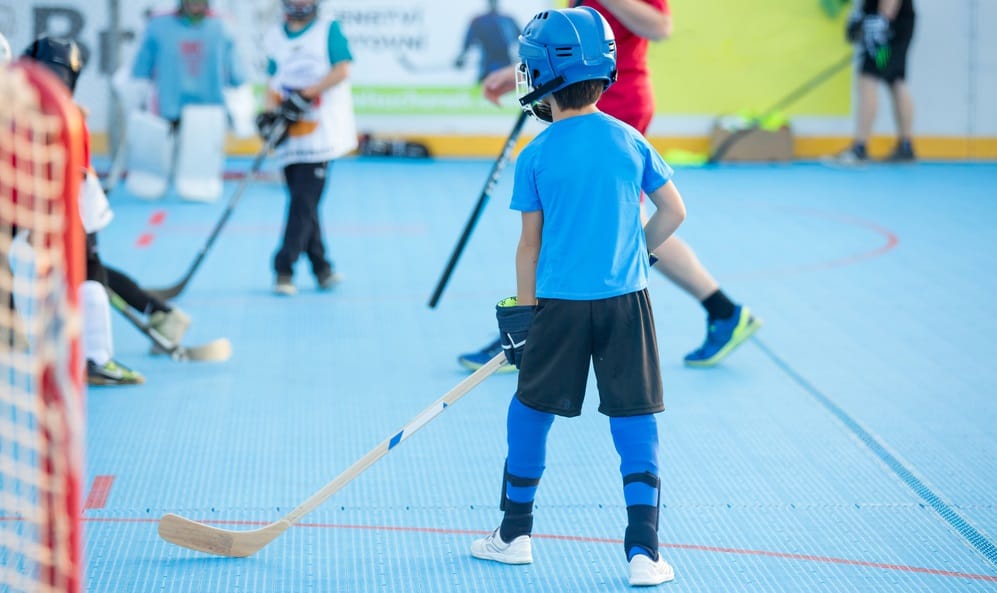 If you think about the amount of wear and tear a hockey stick is going to get on a street, it should come as no surprised that their life expectancy is not very long. The amount of time that your stick will last depends on the surface that you are playing on, how often you play, the stick itself, and how aggressive of a player you are.

Someone who only plays lightly once in a while is going to get a longer life from a stick than someone who plays hard and often. Sticks made out of wood do not last as long as fibreglass or carbon due to splintering, but the other sticks also wear down simply due to the terrain.

Ultimately, you should look for a street hockey stick that is going to last more than one or two games. You need one with a reinforced blade, like an ABS, to give you the best longevity possible.

All around, we recommend the Sher-Wood 5030 Heritage as the best street hockey stick. Not only is this stick a nice throwback to the more traditional street hockey sticks from days gone by, but it is well made and can handle the wear and tear longer than many other sticks.

Remember to think about how you are as a player and you should be able to find the perfect stick for your needs.