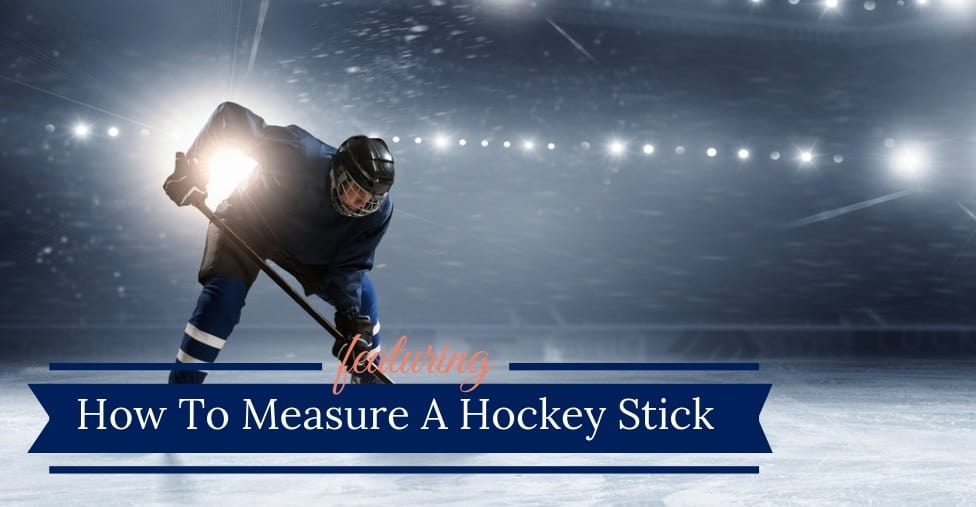 Your hockey stick is one of the most important pieces of gear that you need to excel on the ice. But, if your stick is not measured correctly, you could wind up with a stick that is too short or has too much flex, putting it at risk of breaking. Likewise, if your hockey stick is too long or does not have enough flex, it can inhibit how you play.

While the importance of your stick size is often overlooked, if you want to be competitive and play to the best of your ability, you need to know how to measure a hockey stick.

Before we get into how to measure your hockey stick, let’s take a look at the different size categories of hockey sticks. To begin with, sticks are usually senior, intermediate, and junior sizes. There is also a youth stick size for the littlest hockey players. This is who uses them:

Even though the breakdown can make it easy to get an idea of the right category for you, there are some exceptions. Some smaller-built players prefer the intermediate size and likewise, taller intermediate-aged players opt for the senior length.

Once you have an idea of what size category you most likely belong in, you will want to consider the type of material that works best for you. There are a few different types of material out there, but the most common is composite and wood.

Composite has become the popular choice in more recent years because they are more durable and offer the ability to give a power shot. Wood, on the other hand, is less expensive and is more traditional.

The composite sticks are made from a combination of different materials, such as carbon-fiber, fiberglass, resin, graphite, and even Kevlar. The different combinations will provide different weights. Newer players tend to need a heavier stick in order to have a better feel for the puck.

You need to know how to measure a hockey stick properly or you might wind up with the wrong length for your needs.

Sometimes you might measure your stick this way, and it still does not feel quite right on the ice. In these cases, you might need a shorter or a longer stick, depending on your needs and how you play.

Players With A Shorter Stick:

Players With An Average Stick:

​Most players prefer the average length of a hockey stick, but grinders specifically stay with this size. Since grinders are known for digging for pucks and getting out of corners, an average stick allows you to be in close quarters while still having enough length to intercept shots if needed.

Players With A Longer Stick:

Players who prefer a long stick are normally the defensemen. The longer stick helps them have a longer reach, making it easier to steal a puck from an opponent. You will also be able to intercept passes or prevent a puck from getting too far away. A longer stick also gives you the ability to have power behind your slapshots. When measuring for a longer stick with your skates on, the end of the stick should reach your eyebrows.

Keep in mind that young players who are still growing should not have a stick that they can grow into. Having too long of a stick can be detrimental to their development as hockey players. For beginning players, it is actually recommended that the stick be too short rather than too long and this theory should carry over to children just as much as it does adults.

The flex of your stick actually comes into play when you are trying to fit a new stick. The flex is the ability of a hockey stick to bend. A hockey stick needs to have enough flex to bend the shaft slightly, but not too much or you won’t be effective.

Stiff hockey sticks: A stick that does not have enough flex will be too stiff to be accurate. You will not have a good handle or feel for the puck if your stick doesn’t have enough flex. The higher the flex number, the stiffer the stick is.

Flexible hockey sticks: A stick with a low flex rating might be able to have a good feel for the puck on the ice, but you have a bigger chance of accidentally breaking your stick during the game.

The flex rating can often be broken down by the same categories of stick length:

The idea is that the bigger you are, the stiffer you will need your stick to be in order to get the power to make a good shot.

The kick point is where your stick flexes when you hit the puck. Most players will go for a mid-kick point, which is more central on the blade. A mid-kick point is ideal for players who like to give slap shots. Meanwhile, a more agile player who stickhandles would want a lower kick point to ensure a speedy release.

When you are measuring your hockey stick, you also need to take into account your grip. Hockey sticks either come in a textured, sticky surface or a smooth, non-grip surface. A smooth grip will grant you freedom of movement up and down as you play. A smooth grip runs the risk of slipping, however, and potentially missing a shot.

The grip provides control of your stick, even when your gloves are wet, but not all players want to have a grip on their stick, especially since some grips go down the length of the stick. It comes down to preference. If you are a beginner, however, a grip can help you practice and hone your skills better than a stick without a grip would.

Ultimately, when you are working out how to measure a hockey stick, there are more variables to consider than simply the length of your stick. You will also need to think about the flex, the grip, the material, and even how you play.

Also, as we mentioned in this article, a composite hockey stick is a great hockey gift idea for your husband or son. So keep these variables in mind when choosing the perfect stick for your loved ones.

Your hockey stick is essential in how well you play. Make sure that it is the perfect fit for you.