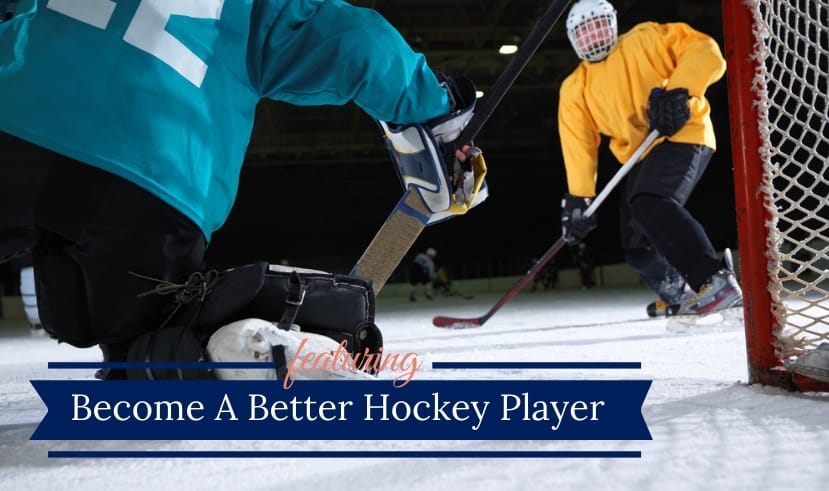 Regardless of your skill-level, age, and the amount of time you have spent on the ice, everyone wants to become the best hockey player that they can be.

We all are looking for ways to improve our game, but how can we do it?

​Hockey is a team sport. No one can win a game all by themselves. The entire team needs to work together toward a common goal, which includes agreeing on the means of reaching the goal.

If you can help out a player who needs it, you can in turn receive help when you do. Working on the bonds of the team beyond the rink can also improve your game, building your comfort, passion, and confidence in your team’s ability to win.

​Naturally, your coach is going to write up the plays and positions to give them to you, but are you studying them? There is a big difference between acting impulsively and acting from practice.

Having worked on your part in plays, practicing them, and memorizing them, you will be a better player and a bigger asset to the team as a whole.

​Practice makes perfect, but are you practicing the right moves in order to be successful on the ice? If you play an offensive position, there are some methods that you can learn and practice to improve your skills. Some of these include the following:

A) Altering Your Speeds

​One method that is used by the pros is altering your speed during a rush. This means you can either speed up or slow down suddenly, taking the defence by surprise.

B) Overestimate Your Shot

​When you are trying to get the puck into the goal crease, you can try overestimating the angle of your shot instead of going for a direct shot. The reason is that a linear shot is predictable and can easily be stopped by the goalie or the defence.

When you overestimate your shot, there are more options for where the puck might go, all of which are better than being caught by the defence in a rush play.

C) Take The Puck Across The Crease

​Just like we mentioned with overestimating the angle on a goal shot, changing your angles in play can also make a huge difference. The puck needs to be out wider than where you would normally have it when you are shooting.

Then, give the puck a toe pull toward your feet and then shooting. This way, if a member of the defence lines up to where he thinks that the puck will go, you will surprise him with a shot at a different angle.

​In the heat of the moment, players will often shoot recklessly and blindly, trying to succeed in getting a shot in before a defenseman comes at you. Instead, take a moment and consider the angle of your shot.

You might still lose the puck, but you will have had more control over the direction that it was headed.

Do not forget your importance or contributions to your team. Confidence is a choice. It does not mean you need to be cocky either, but you still need to give yourself credit.

​When you are on a hockey team, you are committing to the team. The team will rely on you, just as you should be relying on them. This means that you need to be at every practice, on time, and ready to go. You will not blow off practice, team meetings, or games.

You will be there where you have pledged yourself to be. In turn, your hockey skills will improve and you will be better prepared for hockey games, making you a better player and teammate.

​Communication within a team means a few different things. During a game, it means telling your teammates making sure you are where you need to be.

During practice, it can be settling up any confusion or even bad blood that you might be experiencing. Communication is essential on a team; just make sure it is positive communication and not criticism.

7. You Are Not Perfect

​We are all learning all of the time. You are not a perfect hockey player, because no one is. Do not be afraid to try new things or learn new skills. In the end, humility will give you the ability to make progress and become a better player.

​Just like any skill, the more you do it, the easier it is to do. Practice might not make perfect, but it does make habit, so the more you are on the ice, the more natural it will be for you to be on the ice. When you practice skills regularly, those skills become second-nature.

Then, when you are in the middle of a game, you will be able to pull out what you have rehearsed without hesitation. We all make mistakes, but they are less likely to happen when you have practiced enough to make the right move a natural move.

Remember that everyone has room for improvement and is working on something. Identity the areas of your hockey game that need the most work and set yourself toward improving them, whether it is being a better teammate, better listener, or even a better shooter.