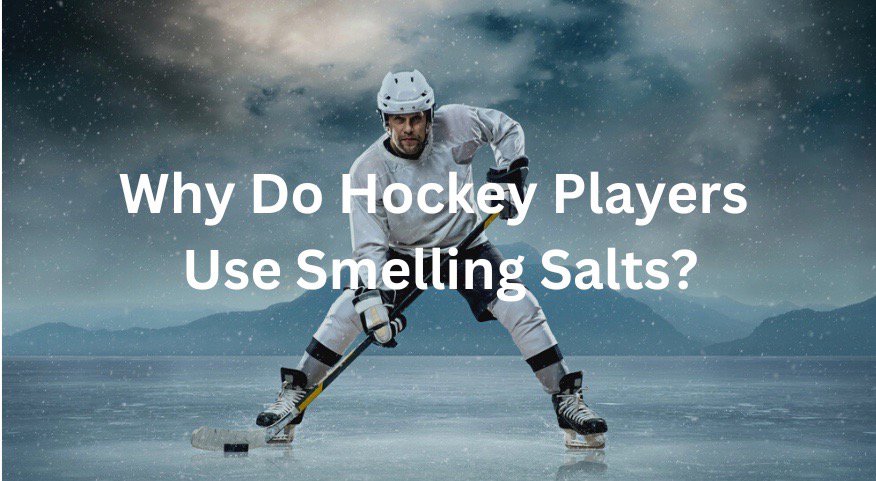 If you have ever watched an ice hockey player closely, you might have noticed him sniffing a packet while he is sitting on the bench, waiting to play.

On the surface, it looks like a drug problem, but that is not the case.

In fact, the players are not sniffing illegal substances, but they are actually sniffing ammonia-laced salt, also known as smelling salts. It is a colorless solid that looks much like table salt.

Historically, smelling salts have been used to help rouse a person to consciousness after passing out, but they have also been used with the idea that they can enhance your athletic performance.

So, the question is: why do hockey players use smelling salts? Does it give them any advantage in the game?

We have broken down everything that you need to know about hockey players and the use of smelling salts.

What Do Smelling Salts Do?

Let’s start out by looking at what happens to your body when you sniff a smelling salt.

You might already be familiar with the idea of smelling salts from media, as they are used to help rouse people once they have collapsed from fainting.

This simulates the human instinct that they are under attack, initiating the fight or flight response.

The smell of the salts will also cause your eyes to water, your nose to run, and will certainly flare your nostrils.

It can be a little shocking to realize that people are willingly sniffing the smelling salts, given what it can do to you physically.

Why Do Hockey Players Use Smelling Salts?

While we know what smelling salts do to your body, the question remains: why would an athlete want to alter his physical state before a game?

In truth, the smelling salts only give players give a small jolt to the players, waking them up right before a game.

The theory for hockey players is that it helps with their performance, but this idea is not based on any scientific fact. Instead, it has become a kind of ritual of sorts.

Even though there is no science behind the use of smelling salts, players have become convinced that they work, based on the group mentality.

Players will look toward other players on their team and decide that the salts are working for others and will therefore work for them as well.

The Ritual Of Smelling Salts

When you are thinking about the ritual, you can relate it to someone rubbing a lucky coin or a rabbit’s foot.

It is just something that is done as a form of good luck before games. These kinds of rituals and superstitions happen across all types of sports.

Are There Any Dangers Of Sniffing Smelling Salts?

Smelling salts might not be an actual drug, but they have previously been banned from another sport: boxing.

In the past, smelling salts became a common practice for boxers to use before a match.

Yet, it was shown that the salts can cause undetected neck injuries. When you smell a smelling salt, your neck will jerk suddenly to get away from the unwanted smell.

You have no control over the jerking motion and if you jerk too intensely, you can dislocate or injure your spine. In a worst-case scenario, it could be as bad as paralyzing you by damaging your spine.

Additionally, if you sniff the smelling salts far too often, you can easily damage your nasal passages.

The ammonia within the salts will burn the delicate skin on the inside of your nose, which will worsen over time. This means that you will have a lot of nosebleeds and headaches.

The use of smelling salts is highly unlikely to be fatal. Ammonia is toxic and misuse can harm your health.

The dose of ammonia is very small and not at a level that can kill you, however. Despite the physical alterations smelling salts can cause, the results are very brief and temporary.

They will not cause you to have any long-term health issues, such as high blood pressure, but they can cause a lot of nosebleeds.

Where Can You Buy Them?

Smelling salts have been around for a long time, so they are not hard to get a hold of.

You do not need a prescription or anything to purchase them. You should be able to find them at your local drugstore, or you can always order them online from somewhere like Amazon.

They do not cost much to get at all and at least they might be a nice addition to your first aid kid, if you are not trying to use them to enhance your performance.

As we mentioned above, there is no scientific evidence that shows that smelling salts can enhance an athlete’s performance.

Instead, the idea that they are effective in helping with performance shows how much of a placebo effect is at play.

Confirmation bias is the only actual proof that the smelling salts do anything. As in, because others say it will work, they must work.

The bottom line is that for a brief moment, smelling salts can provide a positive mental boost to athletes, but will not actually help with performance.